First of all, we would like to thank all of the Hunters who chose us for their Alaskan adventure. We had the same crew of guides, Adam, Bryan, Stace and Dennis and packers Jimmy and Martin with 3 new packers Wesley, Jeremiah and Dan. We are extremely fortunate to have such talented and competent help. 2017 was a difficult year for weather. Our winter was cold and late which hampered early spring bear movements. We had trouble accessing some of our traditional spots which forced us to get into some new and exciting country. Many big bears were spotted but just not easy to get to. Jason Preisser took both his brown bear and black bear from our most consistent producer. The black bears are doing much better and we took some very nice ones.

I was contacted by a production company early in the summer about hosting a film crew for a new reality show to be featured on Nat Geo Wild. After much negotiating and logistics we had Les Stroud, aka “Survivorman” and a filming and production crew for 10 days in Western Prince William Sound. The show will be called “Alaska’s Grizzly Gauntlet”, and it features Les surviving in game rich environments to learn about survival from the animals. We concentrated on black bears, but the show will also feature moose, caribou, polar bears, and of course, brown/grizzly bears. It was a new experience, and we were plagued with wet, nasty weather but eventually got some very good footage. We had a lot of bears concentrated on strong pink salmon runs, so it worked out well. It was a new experience and a lot of fun working with Les and the crew. You may even see me on the show.

About the same time we had the opportunity to purchase a new boat, the “Cathy G”. It is a 76’ steel boat that was previously a commercial fishing vessel and converted to a charter boat. It will make an excellent base camp for many of our brown bear hunts and mountain goat hunts. 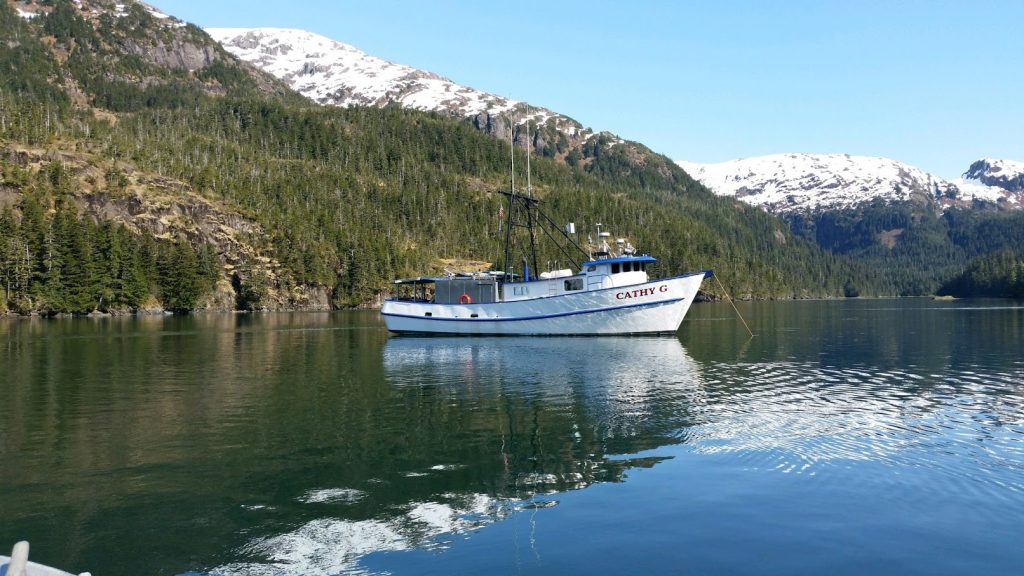 We did not have any moose hunters draw a tag for our area, so that gave Adam and myself the opportunity to hunt for ourselves. We each got a bull which is great for the freezer, but the weather was once again very uncooperative, and we packed a lot of moose meat in thigh deep water. Fortunately we had good friend, Paul Voz and his friends from Mexico as well as Adam’s wife, Stephanie to help out.

Mountain goat season opened on September 15 and we had 3 archery hunters. Gary Wisdom and Brian Lovelace both killed P&Y Billies, but Forrest Parker, my hunter, was not successful primarily because I tried to get us into some virgin country using my commercial salmon boat the “Raging Bull”. We had to navigate several miles of icebergs in Columbia Bay which delayed our start and the billies we had seen earlier could not be found in the fog. We relocated to another trusty spot but could not make it happen with only 2 days left. Forrest is coming back in 2018 to close the deal. We had terrible, wet weather for our second round of hunters but managed to get 3 nice billies including a 14 year old Grandad that will make B&C taken by Jeff Mossop. We closed out the season taking 4 more goats in the rain and snow. The warm winters we have had over the last 4 years have really boosted the mountain goat populations, so it is a great time to come up and put one of these beautiful trophies on the wall. We have availability for both 2018 and 2019.

In closing I want to take the opportunity to remind everyone to slow down and take the time to be grateful for the opportunities and blessings we have in our lives. I find myself getting caught up in the logistics and details of running this business and sometimes do not fully appreciate how great it is to be doing this.

This institution is an equal opportunity provider.